The Dragonfly (Tonbo – トンボ) is an important symbol in Japanese culture. including in its Martial Arts.

Tonbo can be written in kanji as 勝虫, literally ‘Victory Insect’. Tonbo were popular symbols of courage among Samurai warriors during the Edo period (1615–1868). The ‘Victory Insect’ is renowned for its hunting prowess, being agile in flight and also because it is known to never retreat.

For our group there is an extra significance with the Dragonfly. Their larvae (Dragonfly Nymph) spend up to five years hunting in ponds and rivers before emerging as adults. 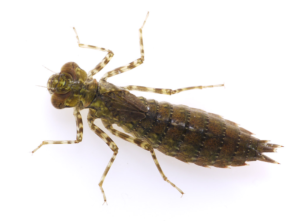 When the pandemic hit we were determined to keep training by whatever means possible: Zoom classes, distanced pairs, then small groups and eventually a short period of indoor practice before lockdown was imposed again.

In September 2021 we were at last able to start regular indoor practice. We hope that the strong foundations laid-down during the crisis will help us ’emerge’ as a vibrant and continually developing new club.

Tonbo Aikido is committed to providing a safe and happy training space for all. We try our best to promote equality, embrace diversity and ensure full inclusion, in the spirit of O-Sensei’s vision for Aikido.

And if you ever have an opportunity to walk along the banks of the river Cam that flows through the city of Cambridge and the surrounding countryside, especially at Grantchester Meadows, be sure to keep an eye out for the dragonflies that will delight.